On their final day of school the children of Grade R at Ukhanyo Primary School received a special treat courtesy of Sandy Kennedy and the sports models of Ergosport. Ergosport Models is based in Cape Town and represents sport models, celebrities, full time professional athletes and professional stunt artists throughout South Africa. Sandy had contacted Masicorp with a request to hold a Christmas party for the children to celebrate their year end. We were delighted to host them at the school this week.

As well as bringing along many of the their sports models, sandy also arranged for the children to meet local celebrities Tamsyn Lee Brown from Good Hope FM and TV presenter Liezel vd Weesthuizen. On a more serious note, Emma King – the toothfairy from SA Health Blog – was also present to give the children some tips on dental hygiene. That was good advice for the children before they tucked into a plateful of treats including an excellent selection of cup cakes provided by Ergosports model Lee-Ann Sharp.

The children were entertained by several Ergosports models including David Mocke who explained how to paddle across the surface of the ocean. South African free dive champion Hanli Prinsloo then showed them how to move like a fish under the water. There were gasps of awe – from the teachers as well – as she showed them all pictures of a shark. Even more gasps of awe greeted displays by professional parkour, trickers and stuntment Gerry and Kenji, who described themselves as being like spiderman.

Spiderman featured again in a gift pack alongside Barbie and Hello Kitty gift sets, which Sandy kindly brought along as Christmas presents. Each child received a pack as well as a teddy bear which was kindly donated by Lynette Kennedy, owner of Fred I Bear in Johannesburg. Then it was out onto the playground for everyone to enjoy a game of football organised by Dr Ross Tucker assisted by Kevin Pheko and James le Roux, who also kindly donated some of their own school books to Ukhanyo. Those who did not join in the game could be seen being spun around in the air by Tamsyn and triathelete Nina van der Heever who must have been nursing some tired muscles the following day. 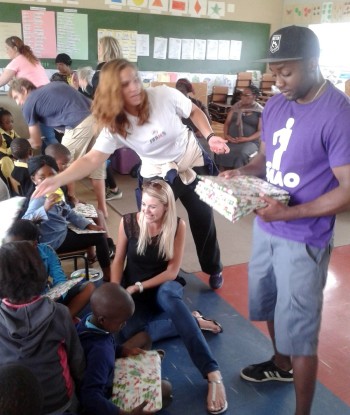 This was a fantastic end to the year for the Grade R pupils and everyone at Masicorp thanks Sandy and her colleagues at Ergosports for making this happen.

To work with the people of Masi and key partners, offering opportunities through education to help residents progress out of poverty towards a sustainable livelihood.